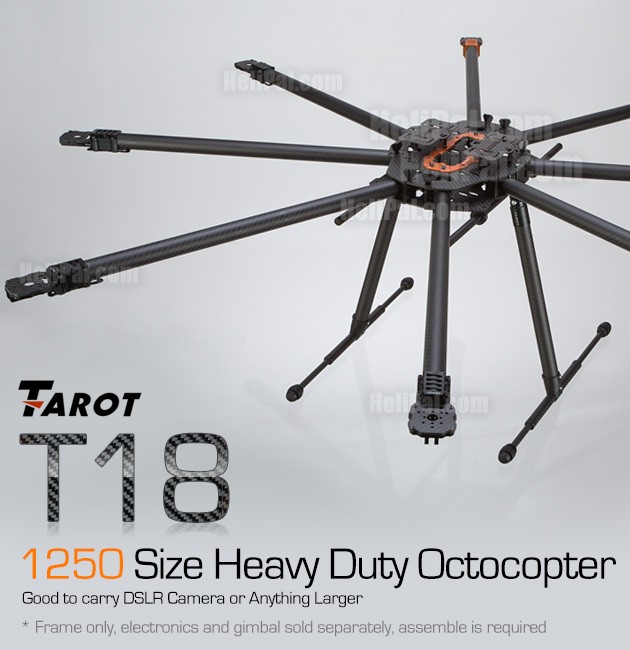 Very Big 1250mm Size Octocopter Frame Set by Tarot
Great to carry Prosumer or DSLR camera for long time filming.
Why play big? Because when it comes to flying object, the bigger the aircraft, the more stable it is. This T18 is a Foldable 1250 size octocopter, it’s even bigger with propellers installed. The drone itself is made with top-end material, 3K Carbon Fiber Plates and Tubes, Aluminum CNC machined parts everywhere, especially the Motor Mount, they are awesome, machined from one big block of aluminum and then anodized with Orange an Black, plus a thick carbon fiber plate as the motor base mount. It has two battery plates on top, you can put 2 X 22.2 5500mah batteries (or more), and you should get more than 15 minutes of flight time. Considering you are carrying a heavy payload (e.g. DSLR camera or bigger), this is long flight time.

Why Eight rotors? Well, eight propellers create more lift and carry more payload, and best of all, let’s consider this is a Fail-Safe feature, with latest flight controller technology, octocopter can still fly and land safely even with two dead motors, for a piece of serious work equipment, it’s wise to use Octocopter.

How to carry a DSLR? We recommend the Tarot DSLR gimbal, that is made for this T15 drone, or you can mount other camera gimbals underneath, however, for those who are looking for such aerial solution, you can DIY your camera rig.

Strongly recommend you use high-end components on this T18 frame, this is a piece of heavy-duty professional equipment, safety first! You may contact us and we will give you some opinions on how to choose the electronics. In our experience, the total cost to make this drone fly and carrying DSLR camera is about USD$3500~4500.

That means you will get 15 minutes of Non-Stop and Stable movie quality footage, this is the tool to get it done! 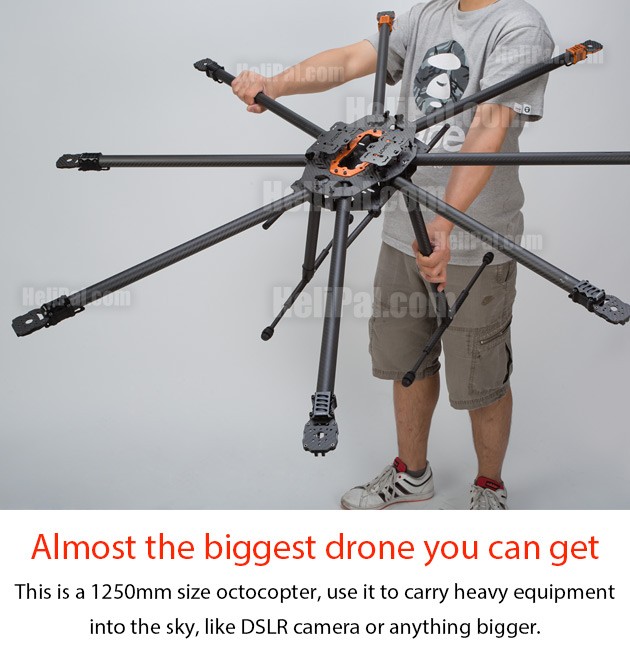 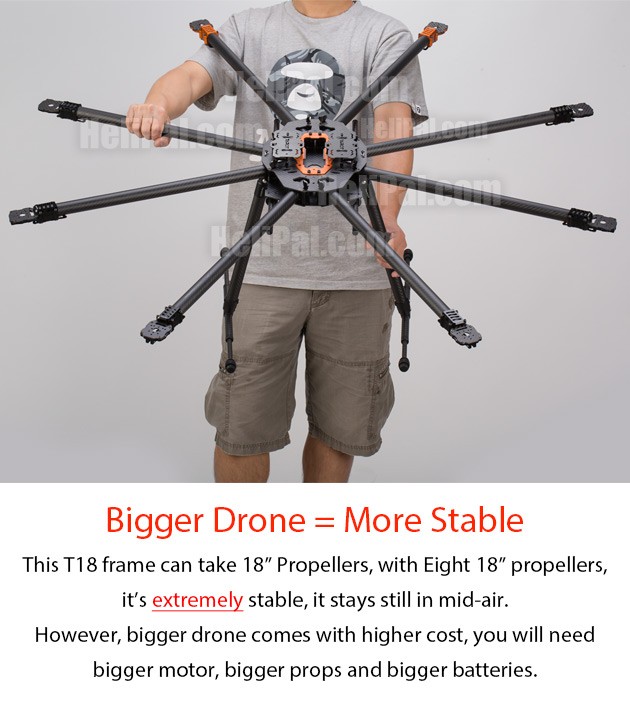 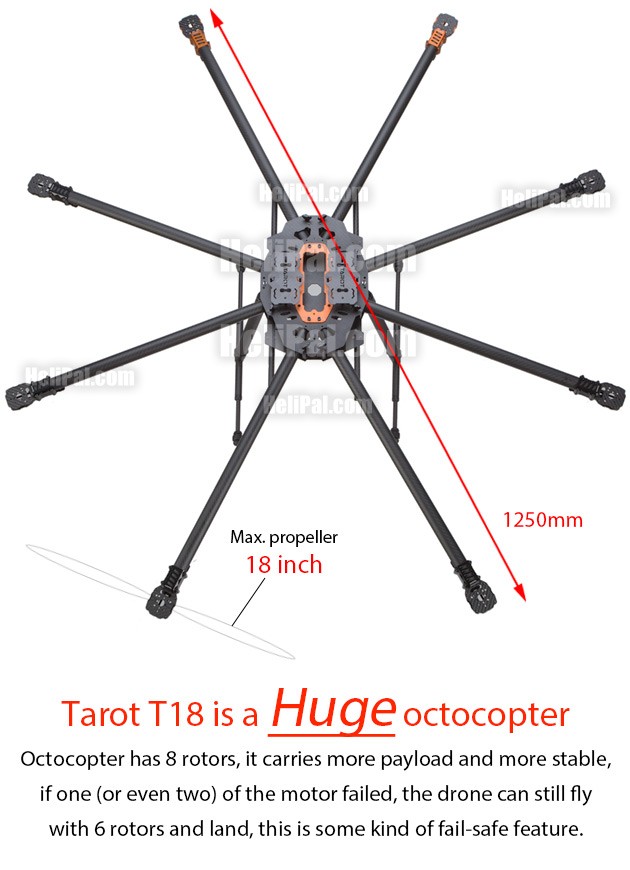 Fold it up in 3 minutes. 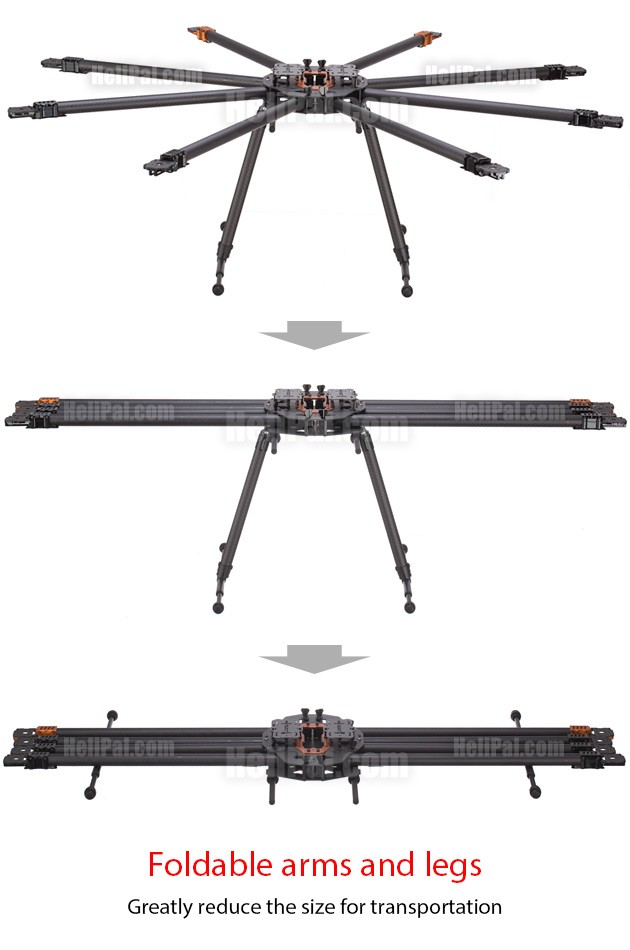 No tools needed for folding it up

They are hand tightening screw, no tools needed. 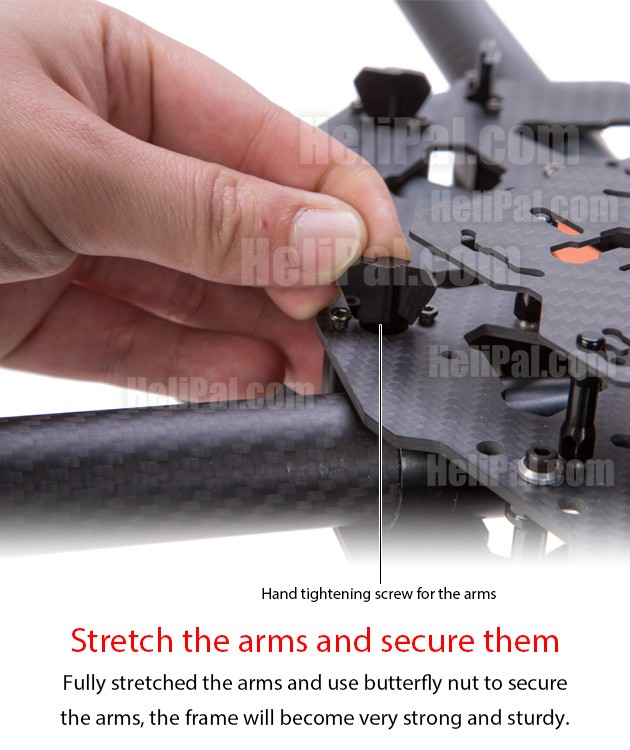 High-end material to keep it lightweight and strong 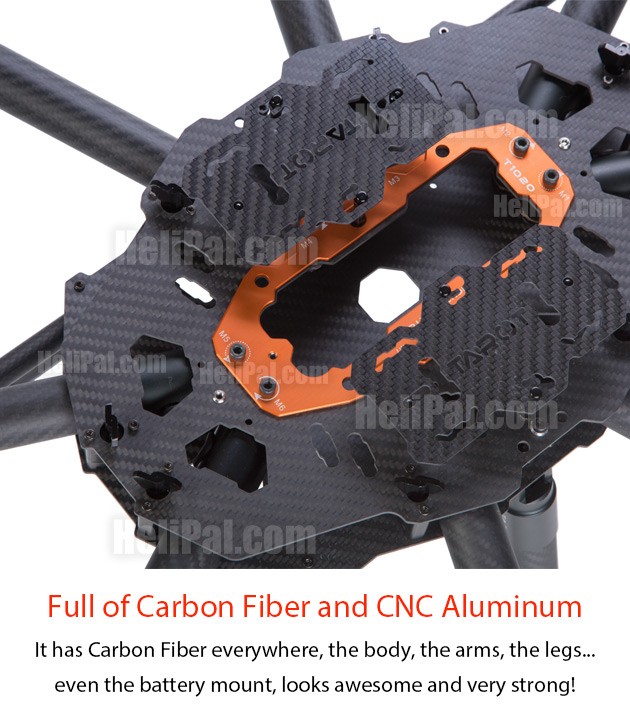 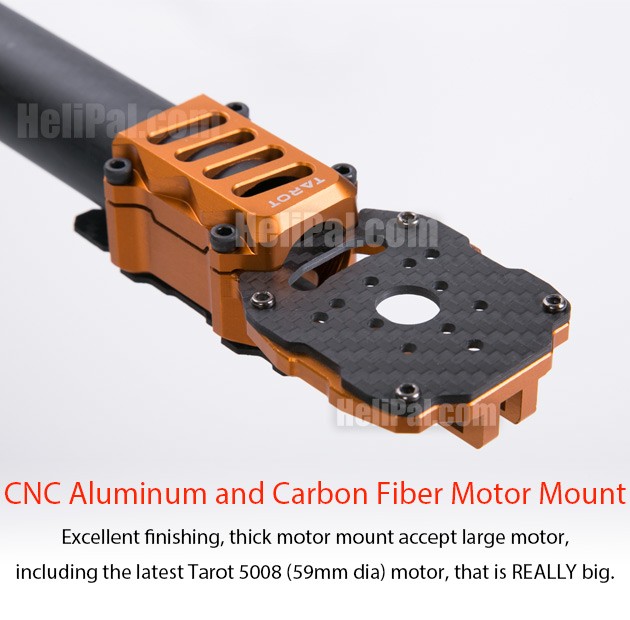 Able to carry two huge batteries on top, however, please remember to put the similar weight of payload underneath to get good balance. 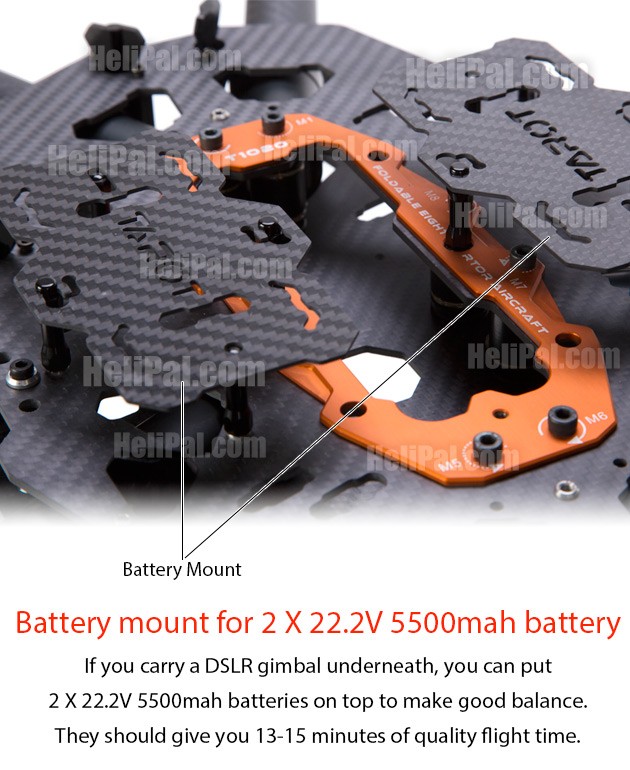 You can put a lot of things down there. 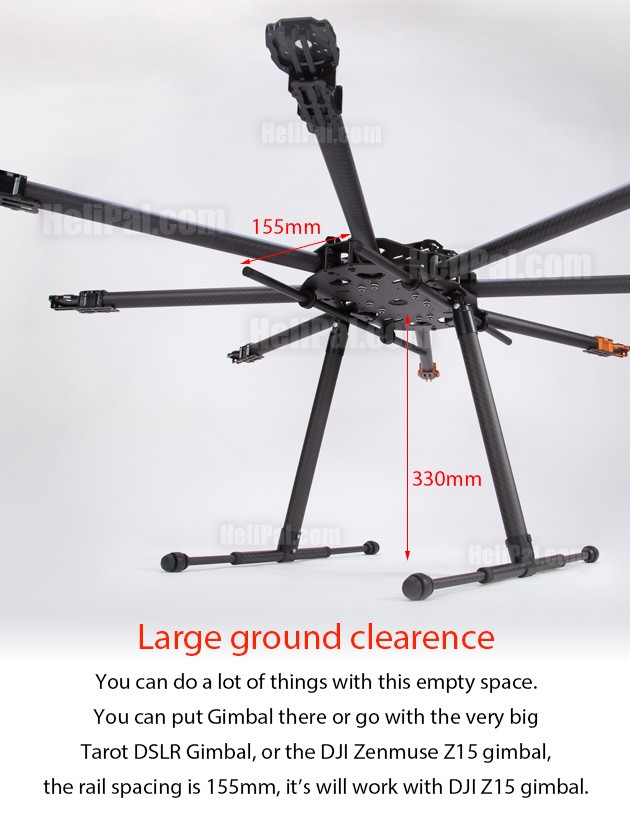 Different from T15, the T18 has 165mm rail system, this is Tarot’s own standard, and will support Tarot’s own Brushless Gimbal’s 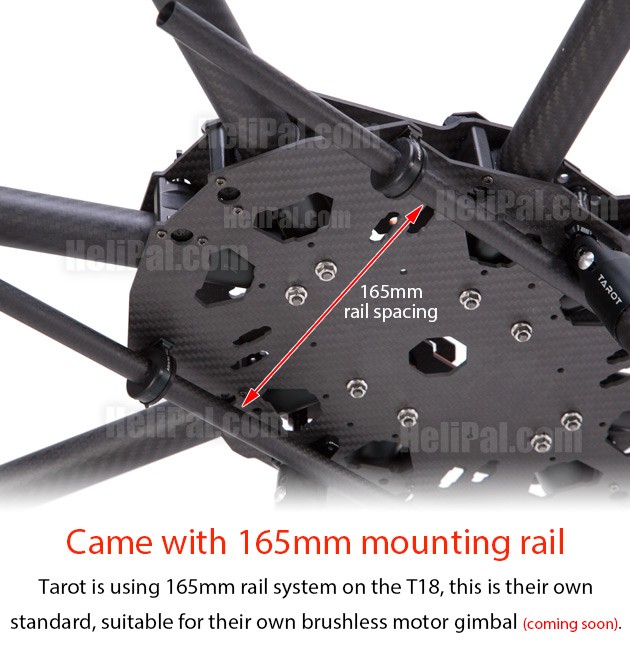 Easy to fold them up for transportation. 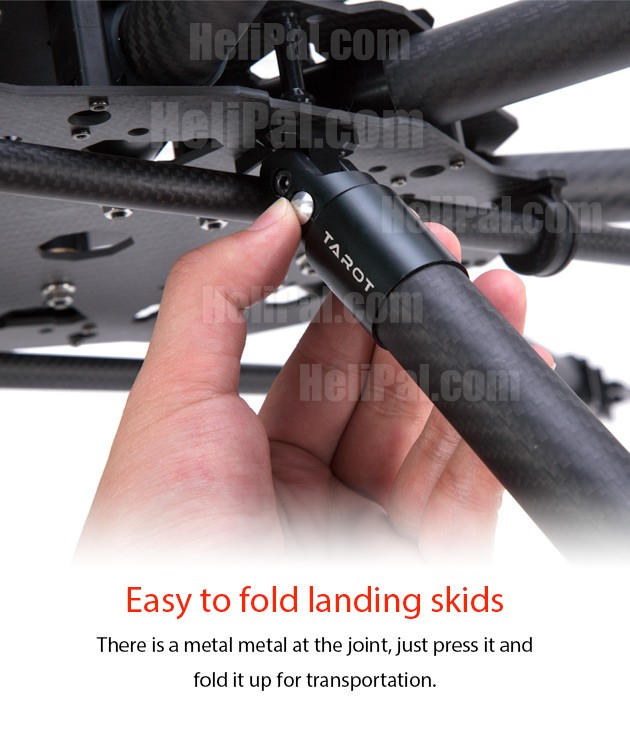 Tarot 16kg AUW (2kg/arm) Combo
This propulsion system is an economical and reliable choice to carry an all-up-weight of 16kg into the air (2kg/arm).

This is Airframe only!
You need to put many electronics on it yourself, namely Motors, ESC, Flight Controller, FPV, Radio Controller, Camera Gimbal and Propellers, they are NOT easy stuff for beginners, so we recommend this airframe for those who can solder stuff and willing to put things together. This is a professional thing for movie grade video shooting, not a toy!!

About the Drone’s Battery
You will need 6S 12000mah~22000mah to fly this big drone which is a huge battery pack. Because of Airlines Safety Regulation, Helipal does not ship battery this big at this moment, you need to get it somewhere close to you.

There are no reviews yet.

SAVE ON PRODUCTS & SHIPPING

Find a plan to help you with your bottom line.